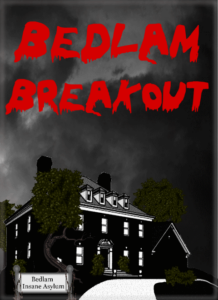 Bedlam Breakout is a Breakout/Arkanoid style game set in an Insane Asylum.

You have to find the key that is in the last level to help the woman escape from the asylum. Play through 15 levels collecting keys as you go.

While you are hitting those bricks there will be some power-ups and downs that you can catch, like Superball which will plough through all the bricks until the timer runs out.

You start out with 3 lives and can catch a falling heart to get more. Once you lose all your lives it’s game over and the woman has to stay in Bedlam forever.